Very often it is necessary to perform as series of operations on a workpiece at points on a circle centered on an axis of rotation of this workpiece. These operation are spaced at equal angles from each other. Usually the workpiece would be round.

A example of common operation done using indexing would be drilling holes in a circle. This could be done round the outside of the workpiece or in a circle on its end

An indexing device is essentially for dividing a circle into so many equal parts. Off the shelf indexing systems tend only to divide by small numbers and often was that only have small factors. For example, the highest would be 12 or possibly 24. The factors might only be 2 and 3.

The whole point of indexing is that it is very common and needs to be done efficiently and without the possibility of making errors. More complicated indexing systems exist but are complicated.

Most indexing systems allow the user to perform the operation at any of the indexed positions but not from one to another.

The exception to much of this is the dividing head. It allows indexing for a very wide range of numbers and it allows for operation between one indexed point round to any other.

Holding the workpiece when indexing

There are two main ways of holding a round workpiece, firstly using collets, secondly using chucks.

Collets would usually only be available for smaller diameters. A chuck would be able to hold a would range of diameters. But a collet would often be more accurate than a three jaw chuck.

It is also possible, in some cases, to hold the workpiece using mandrels and arbors.

The simplest way of indexing is by means of collet blocks. The collet block is a square or hexagonal block with a hole in it designed to take a collet.

The whole point of the collet block is that by rotating it one automatically get a rotation of 90º  or 60º.

More complicated systems exist that index either collets or a chuck.

Very often these cuts or holes are equally spaced with the same angle between them. One example of this would be a cylinder cover. In this case an indexing device is very useful. These are usually designed to hold round workpieces and are able to rotate them. They are designed to automatically lock into position at any one of, for example, 24, fixed, equally spaced positions. If any of the holes needed do coincide with all or any of these 24 positions then this is usually the quickest way of doing the job.

In the case of drilling it is often easier to do this on a drilling machine rather than on a milling machine. Either way the holes should be center drilled first and then drilled completely.

Indexing heads can often hold the workpiece in either the horizontal or vertical plane.

A three-jaw chuck can always be used to hold collects by means of a collet block. This was described earlier. In this case the hexagonal block would be used.

Usually when using a rotary device most of the movement of the workpiece is done by the rotation of the device – not the milling table. Very often a whole series of cuts might be made whilst using the indexing device. Whilst doing this the milling table will not move. In this sort of case it often makes sense to lock the x and y movements of the milling table.

Usually the locking mechanism that selects a location on an indexing device is solid enough for it to be possible to mill the workpiece without locking the movement as well.

If it is necessary to drill, etc at a place where the indexing method does not lock it then it has to be locked some other way.

Most indexing devices are graduated round the edge in degrees. Usually it is possible to lock them at any position. 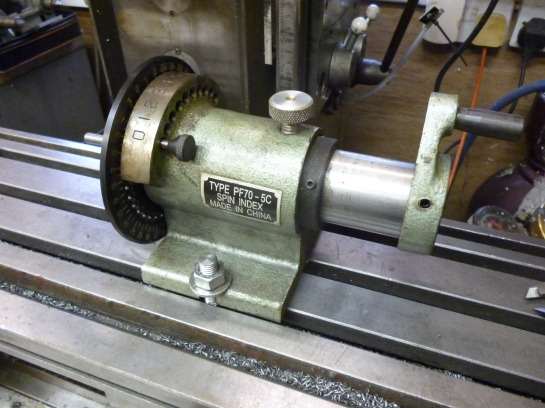 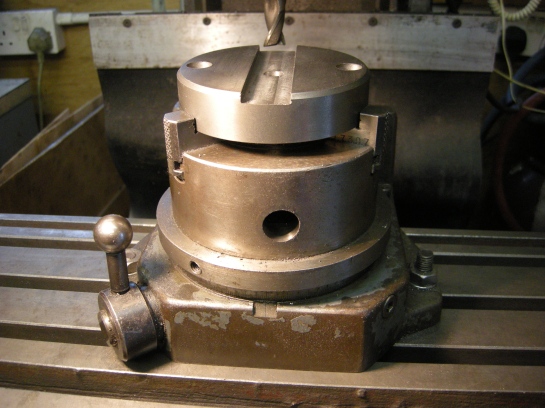 This chuck can be mounted in either the vertical or horizontal positions.

The advantage of an indexing mechanism is that it is much faster than using a worm drive and, just as useful, considering how many times it is necessary to divide a circle into a small number of fixed angles; it is far less likely to let the user make a mistake.

There are usually situations where a collet chuck needs to be centered – when it is horizontal or when it is vertical.

In this case the axes are at right angles. The best method is with a spigot in the spindle and another of the same diameter in the collet.

The simplest and usually the best way of aligning a collet chuck is by means of the single spigot method.

see PP9 – centering a chuck with the spindle

The neat thing about this is that the spigot does not have to be the same size as the workpiece – just change the collet.

Use of indexing chuck

An indexing chuck is useful for holding a round workpiece even if it does not need to be rotated.

A common component that can be made using this is a collar that is slit. One part of the collar fits on a shaft. A small part of its length is slit so it can be tightened around the shaft. This means the shaft, with a hole in it. Is cut half way through one way and then slit the other way as well.

Fig.  Slitting the collar the other way 473

It is very convenient, with the workpiece in this position, to mill a flat for the clamping screw, a tapping size hole in which to make a thread for the screw and then a clearance hole for the shank of the screw in the top side of the collar.