go to the page above this one – ” Milling – making – Dovetails – links“

A Picatinny rail is an accessory that fits a small arm, ie, gun, and is for holding accessories such as sights. It is quite small, about 0.75 inches wide. It functions like a dovetail but the idea can be made very much smaller than this.

Is a dovetail is made using an endmill, as the endmill gets smaller and smaller the quality of the cut decreases. The solution is instead of using an endmill to use a slitting saw. The geometry of the female part is as shown:

This can be cut using a vice which swivels left to right and in just three cuts. 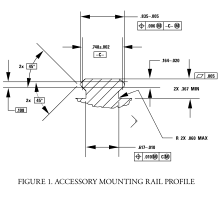 The longitudinal section can be found at: