A parallel is simply a long piece of hardened steel with a rectangular cross section. It is very accurately made, in particular, both pairs of its opposite sides are parallel. 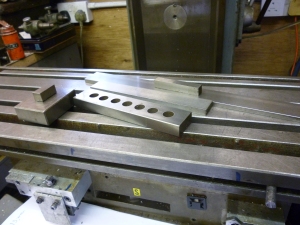 Where a flat surface, i.e., the parallel, is placed on a round surface, ie a round bar, it will only touch along its length a line that is parallel to the axis of the round surface.

In some cases a small but very flat plate can be used to do the same thing. This can simply be a piece of gauge plate, say, 5mm thick and about 50mm square.

The use of parallels is covered elsewhere