go to the page above this DTI – links

The arrangements for holding DTI’s and inductive sensor are very nearly the same. The main difference is that when movement being measured is very small the rigidity of whatever is holding the probe becomes very important. In the worst case it will be found that even the most rigid system will not protect against any of touching of the system. It will be found that disturbances that appear to be completely outside the system will cause fluctuations in the reading.

For convenience, here, both DTI’s and inductive probes will be referred to as just “probes”.

There are several ways of using these probes. Firstly, these probes are often used for aligning workpieces, especially on lathes and milling machines. In these cases a magnetic stand is the most common way of using these probes. Secondly, these probes are often used for comparing the heights of workpieces. In these cases a much more rigid stand is used. A third case is where dti’s are fitted to a jig to check where a certain dimension on a part is within an acceptable range.Fourthly a probe might be used on a special piece of tooling.

A DTI is usually mounted on some arms joined by a flexible joint. The DTI can be held by either a lug, a spigot or very small dovetails. The base of the first arm is screwed into a magnetic block. The magnetism on this block can be turned on and off by means of a small lever. This can be used to “stick” it to any cast iron or steel surface – often this would be part of the milling machine. 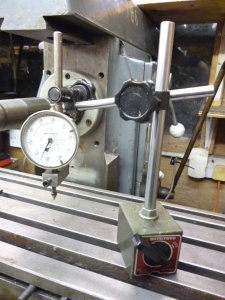 This is often used for aligning workpieces or workholding device on a milling machine. It could also be used to check that a workpiece is centered in a four jaw chuck on a lathe.

Firstly, they might be used for comparing the height of a surface. For this a special stand is used.

This can be done by making a stack of slip gauges of the desired height. These are placed under the probe. The probe is set to zero. The workpiece is then put undr the probe and the different is noted. We have not measured the height of the workpiece directly but relative to a stack of slips of known height.

When DTI are bough new they can be supplied with an assortment of bits for mounting the DTI.

It is possible to make jigs for holding a workpiece. This jig is fitted with probes to measure differences in workpiece from the dimensions of a standard part.

This is a situation where the maximum/minimum limits are useful.