This combination is extremely useful. It is equivalent to a dividing head with a chuck.

Firstly, the chuck has to be mounted on the rotary table.

Alignment with the milling table

The main difference is that most rotary tables do not have the facility to use dividing plates. Otherwise this can be a substitute for a dividing head. In most cases the spacing’s are going to be so many degrees and in many cases minutes per step. The only way to do this is to use a spreadsheet to give and absolute angle for each cut.

This set-up can do many of the jobs that, under ideal conditions, would be done with a dividing head fitted with a chuck (which is covered later)

It cannot be used to hold a workpiece between centers.

It cannot be used to hold a tapered mandrel.

But it can hold a parallel arbor, which could hold a blank, which was to be cut to form a gear. But this would often need a tailstock to support the far end of the arbor.

It might also appear that it has the advantage that the center height above the milling table can almost be chosen to suit the user. But, of course, with most workpieces being round, as the height of the center rises the space between the center and the cutting tool above rapidly diminishes.

The center of the workpiece must be aligned with the spindle

This set-up can be used to machine the ends of boiler tubes. It can also be used to drill and bore holes in barrels to fit steam domes, cylinders etc.

In some cases where a boiler barrel has many holes in it (e.g. Piddington’s Locomotion) on close inspection of the drawings it will be found that various fittings on the boiler barrel are not designed at certain heights from the base of the barrel, as shown on the drawings, but at angles going round the barrel. This set-up is ideal for machining these. Redraw the boiler barrel drawing on a drawing with distance along the barrel one way and angles round from a datum the other way.

When the workpiece needs to be rotated by various angles the use of a rotary table, graduated in degrees, is actually an advantage over a dividing head.

There are two problems here; firstly because of the length of the barrel it is essential that the tube is supported at the far end. Secondly because copper is soft if the jaws hold the tube too tightly it is quite easy for them to distort the shape of the tube. With a large diameter tube there might not be space to use a boring head to machine the large holes.

The solution to the first problem is the steady. In the fig. is a steady that is bolted to the milling table. 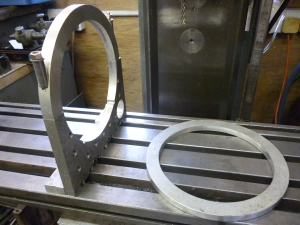 The size is adjustable not by arms as on a lathe steady but by rings made to fit the diameter of the tube being machined. This has the merit of holding the tube tightly but with even pressure all the way round.

A spider is a device that fits into the end of a large diameter tube. The center of the spider has a center drilled in it. This can be used, with a tailstock, to support the end of the tube whilst milling it.

This does mean that the center height is limited to that of whatever tailstocks are available.