The surface clamp has the disadvantage that where the clamp is clamped to the workpiece it is not possible to machine at that spot.

Either way there is a horizontal force.

The distance over which a side clamp can be adjusted is often very limited. If it was bolted to the table by just one hole it would often never be able to reach the workpiece. The side clamp has to have a slot for bolting it to the table. It is set up so it is just next to the workpiece to be clamped. Then the adjustable part is used to tighten it against the workpiece.

Often the width of the milling table will not be wide enough to take the workpiece and the side clamps so often the clamping will have to be along the table in the x direction. If the clamps are in the y direction it is esential that the clamps have slots for the bolts in order to fit the T-slots on the milling table.

The workpiece has to be thick enough to resist this horizontal force. Side clamps cannot be used to hold thin material.

Often the side clamp is used to hold fairly thin material. In this case it is useful for the face of the clamp to be low so it does not project above the workpiece. But there are times when a side clamp is needed because surface of the workpiece must be clear but it is quite high. For example suppose we have to machine the edge of a long thin section. We can use pairs of side clamps/fence along it length but we need to hold the workpiece firmly for some height to keep it rigid. In this case we need side clamps with high faces rather than low ones. The solution to this is the have a side clamp that has a high face for thick workpieces but there is an optional add-on face that gives a low face for thinnish workpieces.

Since movement of the jaw on a side clamp is very small it is essential that the clamp has a long slot for clamping so it can be adjusted for whatever size the workpiece is. 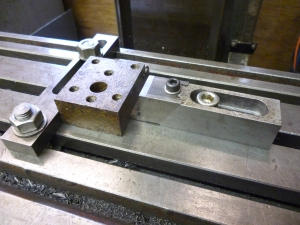 In this case the screw tightening the clamp is perhaps not really big enough. But it is easy to make.

The usual design uses a large grub screw held in one part to turn against a thread in the fixed part. 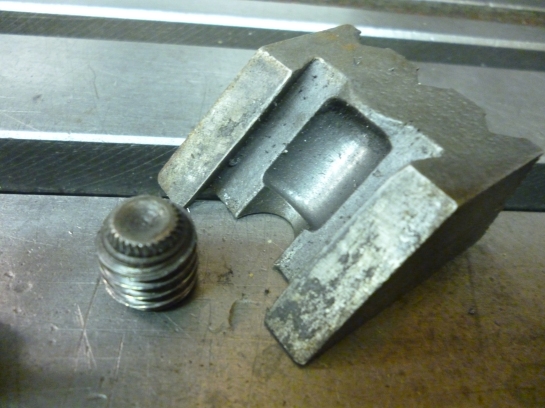 fig 1232 the inside of the moving part

fig 1233 the inside of the fixed part showing the thread. Notice that this thread has been damaged.

Due to the way this clamp works, it can only point in the x direction, not across the milling table.

A really good side clamp is shown in the next photo.

In this case the cap screw pulls the T-nut up against the flanges of the T-slot. The underneath of the body of the clamp is serrated. The result is that this type of side clamp can be tightened harder than the previous type without any risk of breaking a flange of the T-slot. 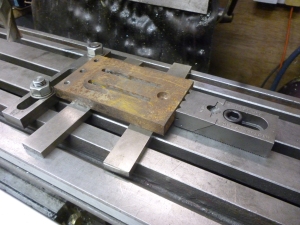 It is possible to make low profile side claps by simply using a piece of material, say, 6mm thick and drilling and tapping it for grub screws that slope slightly downwards. The standard fence shown elsewhere is too high. to get the thinnest possible fence and clamp the “bolts” used to clamp to the milling table are countersunk cap screws. Ones that tighten with screw slots cannot be tightened up fast enough.

Because the length of the adjusting screws is short the only way this can fit a side anywhere on the milling table is if it lies along the y direction. Hence the holes rather than slots.

For really low workpieces special fence can be used.

Similarly the clamp becomes as shown.

Of course, the piece of metal shown here could have been held in a vice because it was so thick. But nothing better could be found.