go to the page above this one – milling – workholding – vices – links

Holding round sections in vices

Though it is not obvious why, it does seem that a workpiece held along two lines of contact, for example a round bar is never as secure as one might expect.

Vices for use on drill presses often have v-shaped grooves in their jaws to help them to hold round sections. Milling vices never seem to have these grooves.

The solution might seem to be to use a V-block between the workpiece and the fixed face of the vice. Clearly the height of the bottom of the V must be well below the top of the faces of the vice. Most commercially made V-blocks are often too big to be useable.

One way of holding a round bar in a vice is to use a spacer between the round part and one face of the vice with a V-shape in it.

It is quite easy to make V-blocks whose width is less that the height of the face of the vice just for this purpose. Whereas on a V-block the angle of the V is always 90º this severely limits the smallest size of round shape that can be held

416 holding a round workpiece in a vice 2

Though it seems possible to hold longish round sections horizontally in a vice so they can be machined it is not possible to hold a shortish section without a risk of it slipping though this could be done with a square section of similar length.

Short round shapes can be held with their axis vertical by holding in the vice with a V-block on its side.

Where the diameter of the workpiece is large compared to the length it is often possible to turn the ends flat (on a lathe) and then hold it on the milling machine by holding the flat faces in the jaws of the vice. This sort of shape is risky. If however a long V-shape is used to hold it then it is not a frictional force holding it and it is no longer a risky shape. 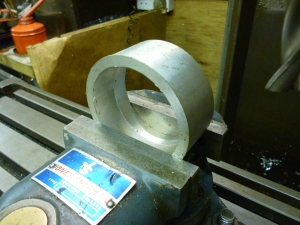 417 holding a round workpiece the other way round