A sub-table is really just a plate. Usually it is rectangular. It needs some means of bolting it to something else – often the milling table. It also needs to be possible to fit either a workpiece or other workholding device onto it. This would usually be dome with T-slots. 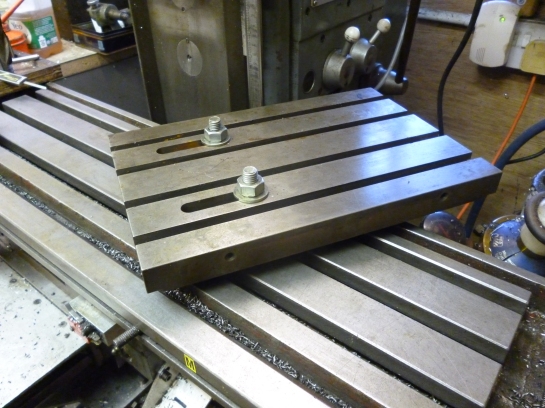 It is desirable that whatever means is used to bolt the sub table to the milling table that the surface is free of any protruding bolts etc.

Fitting devices to the milling table

One use of this is where the cut needed is longer than the milling machine at hand can actually manage in one go. Where the workpiece has a long straight edge this can be done with just a fence as was shown earlier.

If the workpiece does not have a suitable edge then the sub-table is used to simulate one.

Fig.  Machining the right hand end of the workpiece 597

The workpiece can be moved to the right in the usual way and machined as required.

Fig.  machining the middle of the workpiece 598

The sub-table can now be slid to the right and the middle part of the workpiece can be machined.

Fig.  Machining the left hand of the workpiece 596

Then the sub-table is slid along the fence into the last position and clamped again to the main milling table. The workpiece is machined again.

A similar technique was shown earlier using fences but not using a sub-table. But that would only work if the workpiece had a long straight edge on it (and in the right direction). This will work with a workpiece without a straight edge or, if it has a straight edge, with this edge at an angle to the x axis.

The fig. shows one made using the long milling table available from Arc Euro Trade.

It could be used for machining tapered flutes. In such a case the workpiece has to be mounted so that the imaginary point where the lines of the two edges of the flute meet has to coincide with the axis of rotation of the swivelling sub-table. This means that the length of the swivelling sub-table needed might be significantly longer than the length of the flute to be machined.

In many cases it does not matter if the bearing arrangement stands higher than the surface of the swivelling table.