Most angle plates have on the two main surfaces slots so either face can have a workpiece, other device or the milling table attached to it. Notice the direction of the slots on one face will usually at right angles to the slots on the other face. This means that whatever is mounted on the angle plate can be move in up to two directions as needed.

Some angle plates are made thicker so they are rigid enough without any stiffening and do not need webs at the ends. This means the internal surfaces can be machined accurately and flat. It will be seen that this is a very useful facility especially where space is limited. 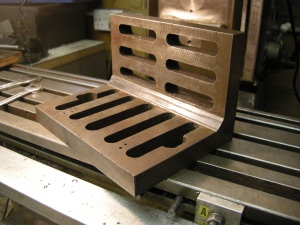 If the angle plate does not have holes in it where they are needed then they can often be drilled in it. This is not a good idea to do this too often. But it is worth doing it to achieve a common set-up like fitting a rotary table to the angle plate. In this case it can be convenient to drill and tap these holes so that studs can be fitted into them. This is can be easier than trying to clamp the rotary table using loose bolts and nuts.

Use of an angle plate

The main purpose of the angle plate is that it effectively rotates one surface, for example, a milling table, into another surface at right angles to the first.

Fig.  holding a workpiece on an angle plate to machine its sides

Similarly it is possible to hold a long thin workpiece on end on an angle plate. It is then possible to machine the end of the workpiece.

Fig machining the end of a long thin workpiece 543

Increasing the effective size of an angle plate

An angle plate can be made larger by bolting a flat plate or rectangular tube onto the front of it. If some rectangular tube is used allowance has to be made for the tube bending slightly under pressure. One solution to this is to fit the nut onto the bolt inside the tube on the side where something is being clamped to the tube.

Use of angle plate on end

Though it would be usual to use the two large surfaces on an angle plate the ends of the two sides are always flat and at right angles to the two sides. This end surface could be mounted on the milling table. It would have to be clamped to the table. The possible advantage of this is that very often the length of an angle plate is longer than the height of either of its sides.

Examples of the use of an angle plate on end

It might seem that two V-blocks of apparently the same size from the same manufacturer would form a pair even if not matched. In practice they can differ so much as not to be usable as a pair.

If they are going to be machined to make them match then it is easiest to match the two V surfaces and then machine the others to match. One way of doing this is to mount the V-blocks on the angle of an angle plate and then clamp them together. This might necessitate drilling holes in the webs so they can be bolted together. Then the other surfaces on the V-blocks can easily be machined to match each other.

Use of an angle plate for aligning

An angle plate can be seen as being equivalent to a square but of much greater thickness. Because of this it can be used to align two edges at right angles but where one is at a different height to the other.

This can be used for aligning vices

Use of an angle plate as a stop

An angle plate bolted to the milling table to one side of a vice can be used as a stop when holding a workpiece in the vice.

Fig an angle plate as a stop

There is more on this under “Vices”

One advantage of mounting a workpiece on an angle plate compared to using a tilting vice is that it can be used to mill one surface at an angle to another.

The workpiece can be mounted using clamps on the angle plate using a precision protractor. All of this can be done while the surface being used is horizontal.

A setup as shown above could also be used for milling the edge of a flattish component.

On many engines the connecting rods and coupling rods are fluted. It might seem that they could be clamped to the milling table and then milled out with an endmill.

The connecting rod has to be held near the top of an angle plate since the length of the tool is limited. The workpiece is clamped to the angle plate.

Fig.  Machining a connecting rod with a Woodruff cutter 453

If a connecting rod is fluted at all then it is fluted on both sides.

Use of an angle plate with cylindrical squares

If the angle plate has two cylindrical squares mounted on it this can provide a horizontal surface at right angles to a vertical one. This is really useful for clamping flat thin workpieces in the vertical position with the bottom of the workpiece parallel to the table. Many parts are of this sort, one example is a parallel.

The squares can be set to the same height using a height gauge. The workpiece rests on the cylindrical squares and is clamped to the angle plate. It would also be possible to make two or even more parts at the same time like this. This is a situation where only one clamp might seem to be enough for light machining. It would be with a thick workpiece but it would not be enough to stop a thin workpiece vibrating. The top of the workpieces is machined with whatever will give the best finish. The part is removed and any burr removed from it. It is returned the other way up and milled to the width required.

This would be more accurate than trying to make parallels in a vice because the parallels being made are resting on two, accurate points that could be wide apart compared to resting on a narrow, hopefully flat surface at the bottom of the vice.

Angle plate compared to use of cylindrical squares

The great advantage that the angle plate has over the cylindrical squares is that it is possible to mount a workpiece on it whilst it is in a convenient position, that is, the surface is horizontal when the angle plate is held in a bench vice. The plate can then be mounted so this face is now vertical with the workpiece still on it.

Extending the area for vertical milling – 2

But if the angle plate is the other way round, the distance in the y direction is much smaller but the space from the cutter downwards is greater.

This configuration allows, in principle, for the user to use a horizontal milling machine as a vertical milling machine. But it is easy to see that it is very difficult for the user to see what is going on. It is also difficult to set up the workpiece, not only because it is inaccessible but because the surface is vertical. The only way to do this is to take the angle plate off the machine, fit it in a vice and mounted the workpiece with the surface horizontal.

This setup not only increases in the new “y” direction but since the angle could be turned round the depth in the “z” direction is also increased. But this does require an angle plate with flat internal surfaces. 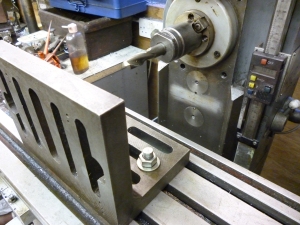 Fig.  Increasing the depth in the “z” direction 447

Extending the area for vertical milling – 3

Suppose it is necessary to mill a piece of metal in a position further from the edge of the metal than the distance from the cutter to the column? One-way is to mount the workpiece on an angle plate at one end of the table and to rotate the head so that is horizontal. If this is done it is important to check that the gears in the head will be adequately lubricated for the work being done.

It is a very common requirement is to mill very narrow slots in a piece of angle steel to make a buffer beam. These side frames slot into these slots.

The workpiece could be held in a vice and cut using a small endmill. If the endmill is very small and if the job is done too quickly it easily breaks.

All of the arrangements for doing this with a vice mounted on the angle plate or vices that tilt left/right are covered later.

Use of angle plates – vertical mode

Where the machine has a vertical head fitted to the column the space behind the tool is fixed and not very large. If however the head rotates on the turret then if it is turned to one side the space suddenly becomes much bigger.

Fig.  – machining the end of a very long workpiece – SMEE

Use of angle plates – horizontal mode

Vertical milling on a horizontal machine

An angle plate can be used to turn a horizontal milling machine into a vertical one. If the vertical type cutter is in the horizontal spindle then it is necessary to rotate the milling table through 90 to get there.