go to the page above his one – “Workholding – links”

When it is necessary to tilt a workpiece (workholding device are covered later) there are several choices. Most of them are only suitable for a certain range of angles.

Tilting tables are often graduated but these graduations can vary considerably in their accuracy. (This is also true of other devices such as vices, which are covered later.)

Tilting devices that depend upon the sine bar principle can be setup, accurately, because they use this principle.

It might seem that if it was necessary to tilt a dividing head then simply putting something underneath it at one end would achieve the required result. But, firstly, it is usually necessary to set the device at an accurate angle. Secondly it is always necessary to fixed it to the milling table securely. This means to pieces of metal are needed at either end. They both need to have their top surface at the right angle at the point where they are clamped. Even then they will only work properly if they are a certain distance apart.

If the two ends of whatever was being tilted were a long distance apart this would be a possible solution.

The simple way of tilting a device (or workpiece) is by means of a wedge.

For the wedge to be able to hold another device properly it is necessary to use bolts with tapered washers. The tapers on the washers matching the taper on the wedge.

The most obvious limitation of the wedge is that the angle is fixed. The one shown above was made by holding the workpiece, i.e., the wedge to be, using a rack vice as described later. This wedge was made to tilt a particular device – a dividing head at an angle of 5°.

One of its great advantages is its very low height. It is only suitable for small angles.

A wedge of 5° will tilt a dividing head – one way round. But it will also tilt it by -5° if it is turned round the other way.

The tilting table is exactly what it says – a table that tilts. The type that is readily available will tilt is from 90º one-way though being horizontal, 0º, to 90º the other way.

Its main disadvantage is that in order to do this the height of the table above the table of the milling machine is roughly equal to the width of the table. This often precludes the ability to mount other gadgets on the tilting table without them hitting the cutting tool. 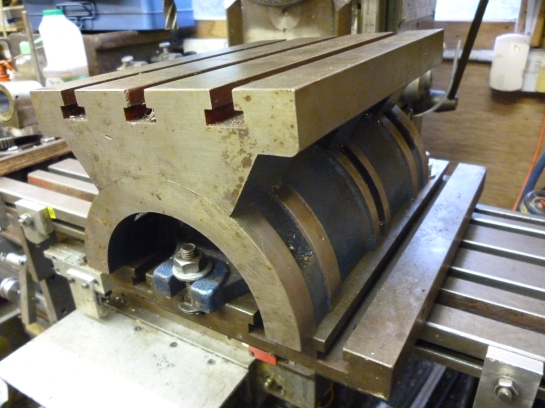 Some angle plates have two surfaces that are connected by a joint so one surface can tilt relative to the other.

This is one of the few ways of easily getting a surface that can go from being horizontal to vertical.

However it is not as rigid at the tilting table. Also it would be very convenient to be about to mount rotary tables etc on it but the tilting angle plates that are available are often very small.

see   PP26  on setting one surface at an angle to another

The sine plate is a variation on the traditional sine bar. The plate has two round bars attached to it at either end just like a sine bar. The traditional sine bar is often used in situation where it does not need to be clamped, for example, on a surface plate for marking out. But if it is to be used to hold a workpiece that is to be milled then the sine plate has to be clamped. If it is tilted this is not always easy.

There are several ways of getting round this problem. The round bars can be extended out from the sides of the plate. This can take up too much space on the table. Alternatively the round pieces can be exposed as shown in Fig.

Normally, with the sine bar, one end would be raised using slip gauges. In this case since considerable force is used to clamp the plate two piles of slip gauges would be needed. A simple solution to this is use one pile of slip gauges to set the height and then have some other means to clamp the sine table in this position.

Holes are drilled in the plate in order to be able to clamp the workpiece (or other workholding device to it).

A sine table is similar to the sine bar except it is much wider and might have T-slots on it. The angle is determined by the height the table is raised at one end by using slip gauges. The advantage of the sine table over the tilting table is that its height is far lower than for a similar angle on the tilting table. But on the other hand it can only be used up to about 30º.

It is possible to get sine tables that tilt not just on one axis but on two, which are at right angles to each other.

If the table can only be fitted one way round on the milling table then this has the advantage that the workpiece can be elevated along either the x or y direction.

If the table is tilted in both the x and y directions at the same time then the resulting angles are compound angles.

The real problem with a compound sine table is its height. It will only be useable on larger milling machines.