Back to home page

Back to previous page

Turning on the milling machine

One great advantage is that it is possible to turn workpieces that are of a larger diameter than his lathe might be able to manage.

The most obvious way of doing this is to fit the workpiece in the chuck which would normally hold the cutter. The cutter is a conventional lathe type cutter which is held in a toolholder mounted on the milling table. There are examples of this on YouTube.

The most convenient way of holding the workpiece is by using a milling chuck that uses ER type collets.

first method – where the workpiece has a large diameter

Using the vertical spindle the diameter of what can be held is limited. However a wide workpiece could be held on a mandrel but this would need a center at the far end to make the setup rigid enough for machining. It is quite easy to fit a center to the milling table. During “turning” the milling table would be locked in both the x and y directions.

This means the movement of the milling table cannot be used to move the cutter.It some method of moving the cutter can be arranged then this can be used for turning large diameters.

There is one special case where this works. If the vertical spindle has an International taper and there is such a taper that needs turning then this is a convenient way to hold it. for example it can be roughly drilled on the lathe and then accurately bored on the milling machine. 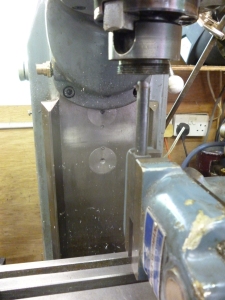 In the second method the workpiece is mounted on a rotary table. The cutter is a rotating endmill.

The advantage of this is that, firstly the diameter of the workpiece can be much larger than on a similar size of lathe. Secondly it is far easier to set large workpieces up on a horizontal milling table than on a vertical faceplate on a lathe.

The example in the previous method was machining a faceplate from a large Colchester lathe to make a “faceplate” to fit the horizontal arbor on a vertical milling machine. 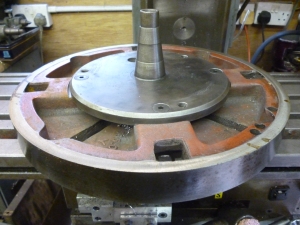 374 faceplate fitted with an International taper

The fourth method is to use a dividing head to hold and rotate the workpiece. The cutter is an endmill rotating in the vertical spindle.

The merit of this is that it is possible to cut very deep yet narrow slots in a turned workpiece.

The workpiece is held in some way on the milling table. The cutter is the cutter on a boring head. The boring head is fitted into the vertical spindle. As the cutter turns is cuts a round surface.