Back to the home page

Back to the previous page

Knurling is a finished that is commonly used on parts that are to be rotated by hand such a knobs. Knurling not only gives a very good gripping surface but can also make the job look as if it has a  professional finish. 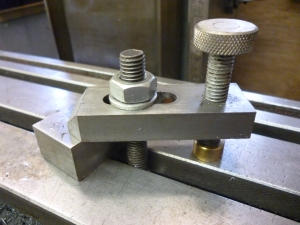 Knurls can be made either by a process that squashes the metal rather than by cutting it. But there is a special knurling tool that works by cutting. This is relatively rare so only the squashing method is considered here.

Knurling also increases the diameter of a part. This can be useful it the part is worn and needs to be made bigger. This gripping surface is also used on parts that are forced into slightly smaller holes or even parts that are knurled so that when they are embedded in plastic they are rigidly fixed into the plastic

“Flat”, ie parallel to the axis of the workpiece, knurls can be of three sorts – straight and diamond and inverted diamond. For either of the first two types the size of the knurl can vary in size. Usually there are three sizes for each sort available. To get the best appearance it is important that the size of the knurl is proportionate to the size of the object being knurled. 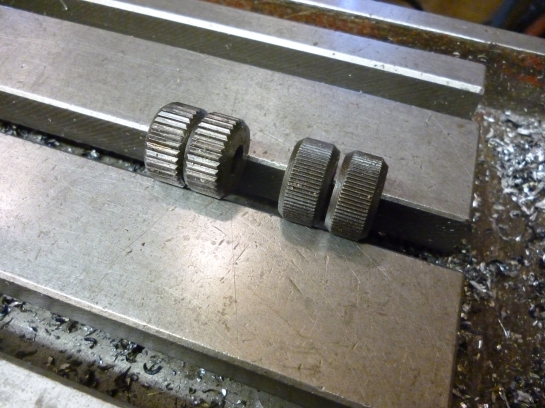 Straight knurls are usually supplied as one pair both with the same size of knurl.

Making knurls on the lathe

Forcing a knurling tool against the workpiece whilst it rotates in the lathe is the commonest way of knurling. The knurling is actually done by a small wheel that has the necessary pattern cut on it. The tool is really just a holder for the knurling wheel.

The metal is not cut but is squashed into shape. This will not give clean knurls with most plastics. It will often not work with brass. However both of these can be knurl using a tool where  the material is cut rather than squashed.

For a diamond pattern two wheels are needed one doing the lines one way and the other doing the lines the other way. A simple tool for doing this holds the two wheels and is held in the tool holder in the cross-slide. However the force required to get a really good knurl is really far higher than the cross slide is designed to provide or the head bearing to stand.

The only satisfactory sort of tool is one in which the cutters are forced against each other by being on the opposite sides of the workpiece. The force needed means that quite a lot of leverage is needed on the screw that forces the cutters together.

Since the force is very high it is important that the moving parts of the tool are well lubricated during the knurling process. This also helps wash away the debris. This helps get what looks like a cut knurl finish.

Because of the high pressure the knurls will often try to move back before the workpiece or move past it. In either case the knurls must be moved so they are at the widest part of the workpiece. It can be useful to lock the cross slide whilst doing this.

It might appear that for a given pair of knurling wheels the spacing of the ridges is fixed. Consequently since we need a whole number of ridges round the workpiece; the diameter of the workpiece has to be a certain value. Strangely enough this does not seem to be the case.

Using a high enough pressure always makes a good knurl in the end, certainly with mild steel. However as the pressure is increased there is a tendency for the knurling wheels to twist slightly. A perfectly good knurl is still produced but on close inspection it will be seen that though all the intersections of the diamonds of the knurl will be perfectly formed but they will not form circles at right angles to the axis of the lathe.

As a knurl is being formed it will be covered with metal dust and oil. A supply of coolant or oil is needed to remove this dust. It will only be possible to judge the quality of the knurl by stopping the lathe and cleaning the workpiece. If a knurling process is stopped like this halfway through when it is restarted it will continue as before.

A diamond knurl is finished when each diamond has a point on the top of it. With fresh knurls a good knurl should look, to the uninitiated, as if it had been cut.

When a satisfactory knurl has been formed its ends will be ragged. All knurls need to be finished at both ends. To get a professional finish it is essential to machine each end of the knurl. These are really chamfers even though one of them might be in the middle of the workpiece.

fig knurl finished at both ends

If a knurl is a continuation of the shaft then the shaft either needs to be of smaller diameter or a recess is cut in the shaft.

.To produce a knurl on a shaft where part of the shaft is left with the same diameter looks unfinished. In this case a small recess should be cut.

fig knurl on shaft of the same diameter

Since the knurling wheels are only about 5/16 inch wide a knurl less than this is easily done without moving the tool holder. If a longer knurl is needed it cannot be done by doing one pass completely, moving along and doing another and so on. Moving the tool along the whole length of the knurl and tightening it up a little bit more each time will eventually produce a good knurl. If the whole depth of knurl is done at one place it will not be possible to move the knurling tool along to make the knurl longer.

Sometimes a long knurl does not look right. One way of breaking it up is to make a long knurl and then break it up with sections of plain turning.

Fig a broken up knurl

Knurls that are then turned

A variation on the plain knurl is where, after knurling the knurl itself is turned. Suppose the knurl produces a large number of very small pyramids then it this is turned the tops of the pyramids are removed and a grid of square shapes is produced. 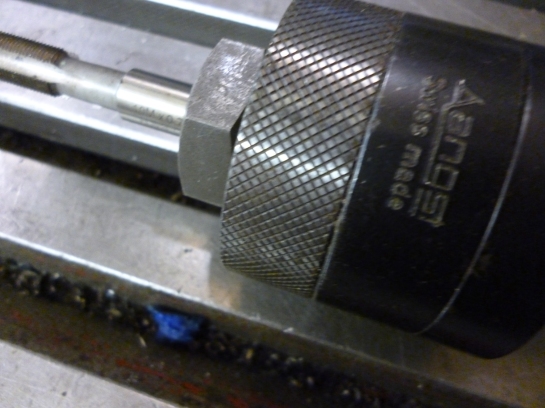 Turned knurls are easy to make. But the depth of a knurl is very small. If a turned knurl is to be made it is essential that the knurl is concentric with the axis of the workpiece so when it is turned the knurl is cut to the same depth all the way round.

It has already been shown that using two helical knurls with opposite helix angles creates a knurl that consists of a pattern consisting of very small pyramids.

It is possible to have a knurl that produces the opposite effect, i.e, pyramid-like dimples. In this case both wheels are the same.

There does not seem to be any hard and fast rules about what sort of knurl should be used on any particular knob. It will be found that the knobs on, say, a theodolite by Cook, Troughton and Simms uses different finishes compared to knobs with equivalent functions to one made by Hilger and Watts. What will be noticed is that in both cases various types of knurls are used in a consistent manner so the user will be able to “recognise” by feel which knob is which quickly.

Where there are many knobs some might be fluted in order to increase this distinction.

A variation on conventional straight knurling can be obtained by cutting straight knurls and then cutting grooves  round the workpiece. The size of these grooves is equal to the size of the grooves the knurl produces. Similarly with the spacing. If the usual pattern is considered to be a diamond pattern then this must be a square knurling pattern.

Knurls can also be convex. There are two ways of doing this.

Firstly, if a narrow straight knurl is made on the lathe with a large chamfer on each end it looks like it is a convex knurl.

This is done by using ordinary, straight, fine knurls in the usual manner. The trick is that the knurl is very short and on each end there is a 45º chamfer. If the length of the chamfer equals the length of the knurl then, if one does not look too closely, the result can be mistaken for a convex knurl.

Secondly, a convex knurl can be made by using a concave knurling tool.

A convex knurling tool can be made by free hobbing a wormwheel using a tap with a very fine thread.

The process described so far forms a knurl by squashing the metal into the shape required. It is also possible to make knurls by using a process in which the knurls are cut. The tool to use this is quite complicated, rare and, consequently, expensive.

One advantage of this tool is that materials such as plastics which cannot be knurled by squashing can be formed by using the cutting type knurling tool.

on knurling in general