go to page above this one Drilling – links

Cross drilling is where a round hole is drilled through the middle of a round bar.

Drilling on a round surface with a drill bit is asking for trouble. In general always use a center drill first unless the drill is guided.

The main problem with trying to cross drill is that if the round workpiece is placed in a vice on an x-y fitting it seems so easy to move the workpiece till the tip of the center drill appears to be at the very center of the workpiece. Then a drill bit is used to drill all the way through.It is only then that it looks as if the hole might be off center.

This is a variant of the bent spigot method used for aligning elsewhere on this site.

This lines up the axis of the drill and the axis of the workpiece. The next thing to do is to make sure the two are locked in this position. Since the drill is not guided, it is necessary to center drill first, then drill.

Use of a Rawlinson type device

It is possible to do the same thing with a Rawlinson type device. The advantage of this is that it works even if the two round parts are different diameters.

With the device shown the drill is not guided and the device is two high to allow it to be used with a center drill. But it is quite possible to use this type of device with a different height to do this sort of job.

Use of a cross drilling jig

The better way of being sure the hole is in the center is by using a cross drilling jig. Most of these are based upon the fact that is a round object is placed in a symmetrical V-shape then the center of the round piece will lie above the vertex of the V. All that is required is something to guide the drill bit.

One way of doing this is as shown. A piece fits over the V. It has a hole in it to take either a part used to set it up or a part to take a drill bit. It is held on the bottom part using two slots. This means it can be adjusted. 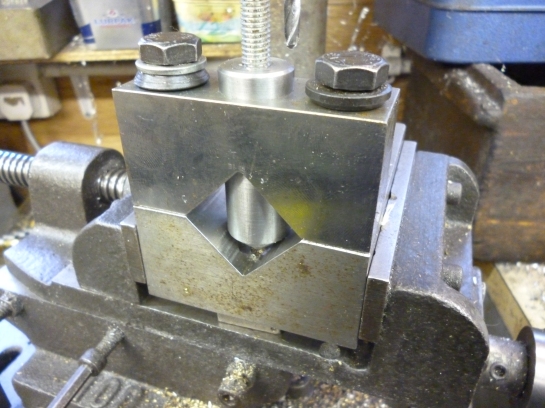 The setting up part is removed and is replaced with a bush.

This bush has a 5mm hole in it. It might seem that a different size bush would be needed for different size drill bits. But a 5mm drill bit can be used to provide a center for smaller and bigger drills so long as the jig stays in the same position relative to the spindle on the drilling machine.

In practice it is necessary to have a clamp to hold the workpiece whilst center drilling it. This can be seen at the back of the block in the next photo. 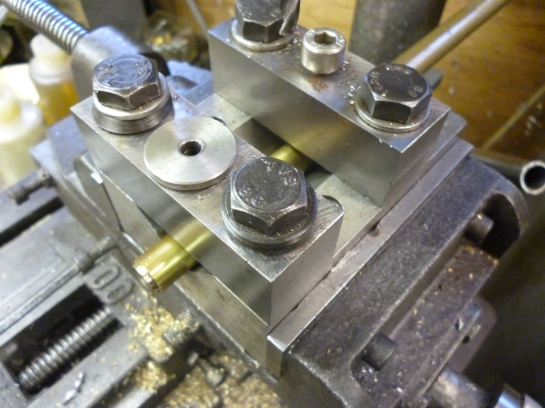 The test for cross drilling it to take a piece of round material, make a sleeve to fit is well. Cross drill the pair. Then rotate the sleeve and see if the drill stills goes all the way through.

One example of where accurate cross drilling is required is where a handle is to be held onto a shaft with a tapered pin. Of course the tapered pin has the property that it will not fall out. It might appear that the hole in the handle and that in the shaft will only ever be mated together one way round but this is not true. There might be times when it would be useful to put the handle on the other way round.