Most casting is done using sand to make the mould. This is most easily done using specially made boxes to hold the sand.

This page is simply a description of the mould box. How it is used is covered here “how to make a sand mould”

In most cases the box consists of two parts. The bottom part is the cope and the top part is the drag. When referred to like this, it assumes to position of the two parts when the mould is ready to be filled with metal. 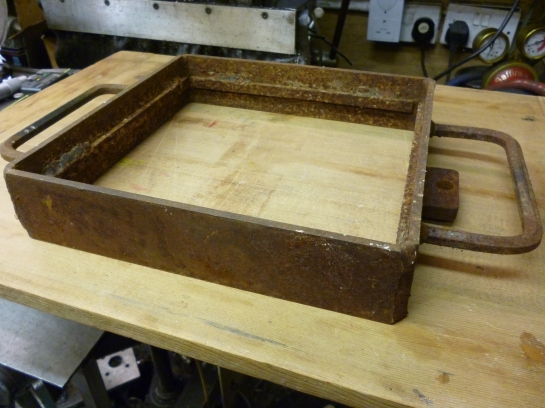 fig the cope the “wrong” way up

There are certain essential features. The box is square or rectangular. It can be made as a casting. Or it can be made as a frabrication as shown in the photo or it can be made from wood. The box does not have a top or bottom. When it is filled with sand, to stop the sand from falling out there is either a rim going round the inside at the top and the bottom or there is a rim going round, as shown, in the middle. At both ends there is a handle. At both ends there is a tab with a hole in it. Though it cant be seen in this photo at the other end the tab has a second hole in it.

In use the whole process starts with the cope the wrong way up on a moulding board, roughly as shown in the photo. The pattern is place on the moulding board. It is covered in sand which is rammed in firmly round the pattern. Sand is rammed in till it reaches just above the top of the cope and is then levelled off. The cope is turned over.

At this point it is the “right” way up. The holes in the tabs are at the top of the cope. It is now possible to fit the drag on it so the pins on the drag fit into the holes on the cope.

The other part of the box is the drag. 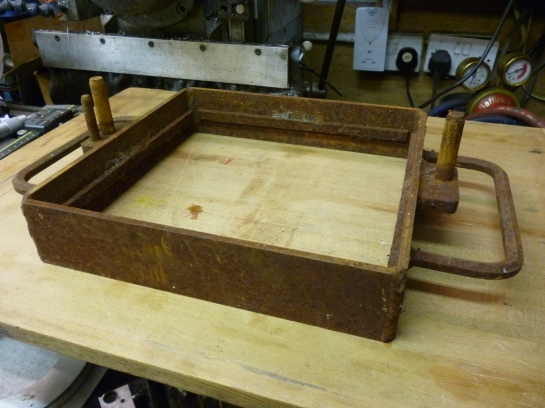 fig the drag the “wrong” way up

This is very similar to the cope except that, instead of hole in the tabs there are pins.Two of the pins are for aligning the drag to the cope. They are made so as to be a tight fit yet without stopping the cope fitting together and coming apart easily. The third pin is a very loose fit. Its sole function is to make sure the drag will only fit on the cope one way round. 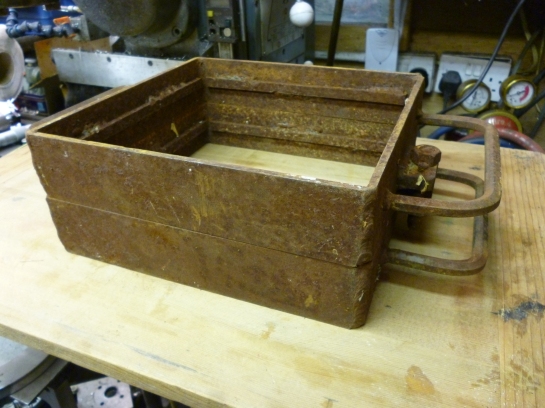 The drag fits on top of the cope.